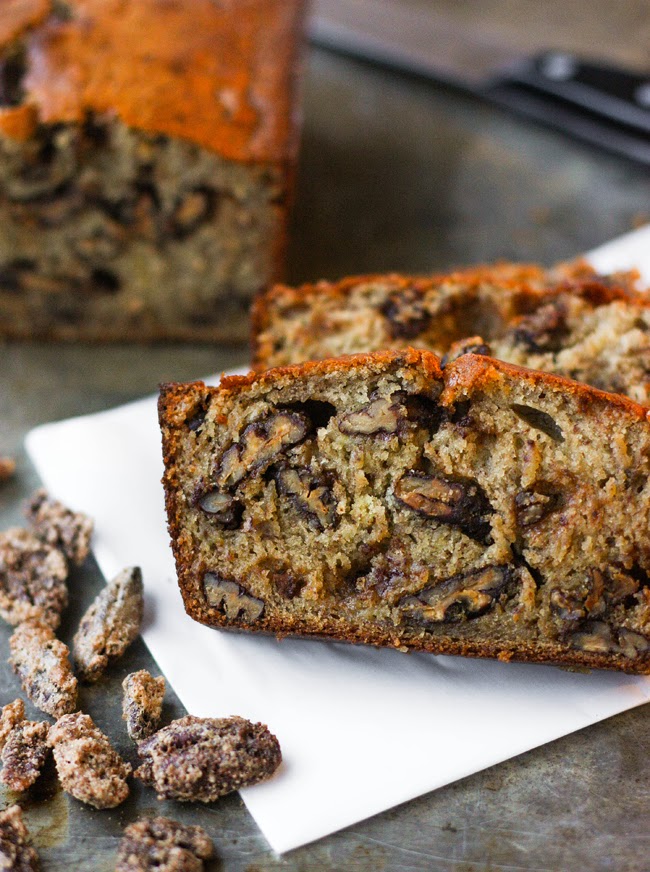 Anyway. I love bread, you love bread (unless you’re gluten intolerant…sorry bout that). So let’s put more yummy things in bread and call it a day! I chose to spruce this traditional banana bread up with a bit of cinnamon and some delicious (and totally addicting) candied pecans. Candying the pecans before putting them in the bread gives them a bit more sweetness and spice, which I’m all for. Also, you’ll end up with a bit of leftover candied pecans to munch on after. 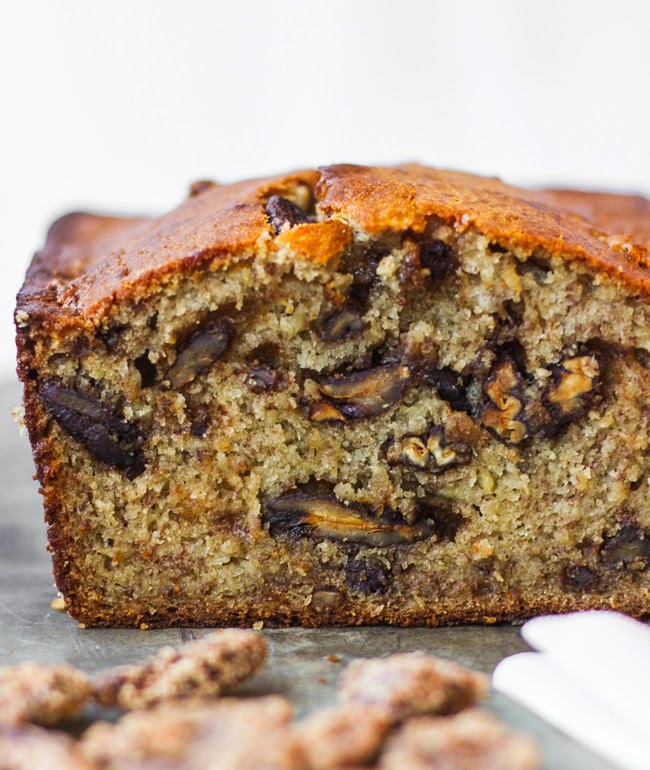 
1. Preheat oven to 300 degrees. Cover a baking sheet with parchment paper.
2. Whisk together egg whites, water and vanilla in a medium bowl. Add pecans and stir thoroughly to ensure all pecans are coated well.
3. In a separate bowl, mix together sugar, cinnamon, nutmeg and cloves. Using a slotted spoon, add pecans to sugar mixture and stir to fully coat pecans. Using your slotted spoon, place pecans onto parchment paper evenly.
4. Place in oven for about 45 minutes, stirring every 15 minutes or so. Let cool and set aside.

1. Preheat oven to 350 degrees and grease a 9×5 inch loaf pan.
2. Mash bananas in a small bowl, set aside. In a separate bowl or stand mixer, blend together butter and sugar. Add eggs, vanilla and bananas.
3. In a separate bowl, mix together flour, baking soda, salt and cinnamon. Add slowly to banana mixture until smooth. Add sour cream, and gently fold in candied pecans.
4. Place batter evenly into loaf pan, and let bake in oven for about 45-60 minutes. To make sure it’s done, insert a knife or toothpick into loaf and if it comes out clean, it’s done!
5. Remove from oven and let cool for 15 minutes before cutting. I like mine with just a little butter and a cup of coffee :).